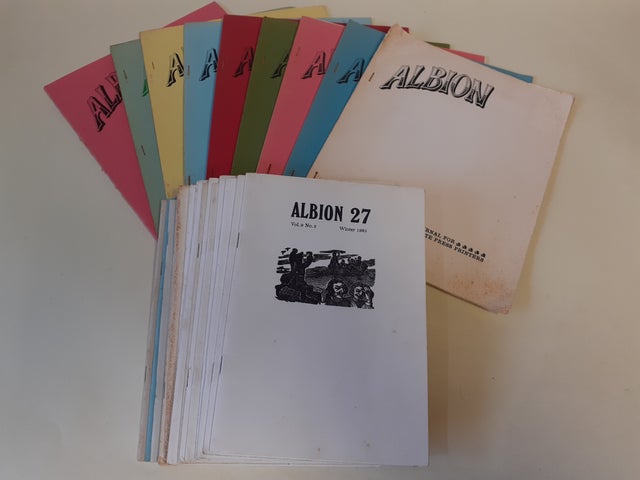 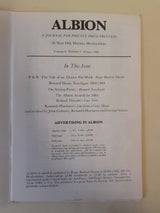 A Journal For Private Press Printers

Issues up to Vol. 4 No. 3 were side stapled with paper covers (255x205mm), after then they were reduced in size (210x150mm),stapled in the backfold with stiffer covers and an engraving on the front. These are a very, very modest forerunner of Matrix and Parenthesis, obviously run on a shoestring by Roger Burford Mason who also printed small editions of poetry from his Dodman Press. Average number of pages for Albion is about 25, there are contributions from poets and printers such as George Szirtes, John Gohorry and Kenneth Hardacre. The contents include essays on typography, individual printers & small presses, reviews of private press and commercial books, occasional hand printed inserts,'case notes' etc. There is some occasional colour printing Issue 21 has eleven congratulatory hand printed pages (for surviving thus far) from Ian Mortimer, Mandeville Press, Alembic Press,Starwheel Press,Stocpuffin Press (in the Arctic Circle),Kit-Kat Press, and others. There is a great deal of goodwill for Mr. Burford-Mason and he received help when occasionally requesting advice on financial problems of Albion. He was certainly encouraged to raise the price of £2.00 p.a. (3 issues) to something more realistic. These publications are a fascinating insight into the early days of the now thriving and wonderful private press world.

These copies are on the whole in good condition, the cover of Vol.4 No.3 has some browning (not foxing, I think) on the front cover, as do a couple of the later issues along the outer backfold.

The cover of the first copy here is printed as Vol.2 No. 1 – inside it declares itself as Vol.1 No.2 – but it is the former.